Originator has been home to a variety of events, from VR game nights to live music. One of the most unique events to be housed in the studio’s walls was “Icon Suburbia”, a multimedia art exhibit created by Sean Lopez. Guests would enter the studio and be surrounded by monitors and projections, all playing videos of Lopez’s creation. The event ran for one night only, but audiences were captivated.

Like the title suggests, the videos show footage of a quiet suburban neighborhood, while poetry is read on top of it. There is definitely a strong sense of quaint childhood memories, but with an eerie twist to them. Is it meant to invoke a feeling of disquiet, or a feeling of nostalgia?

“On top of one of my notebooks it reads ‘I HATE NOSTALGIA’,” says Lopez. “But that’s a joke I wrote to myself.”

The show started with a loose idea of the physical setup of the show and was filled in with a neighborhood of the mind. This neighborhood is a dreamspace, similar to purgatory, that Lopez had been writing about in his poetry for the previous 6 years. He set about combining video and poetry to mimic the feeling of this ethereal neighborhood.

“My biggest concern was that the show be able to synthesize text, visuals, audio, and space in order to culminate into an immersive experience that moved beyond the individual elements contained within,” says Lopez. 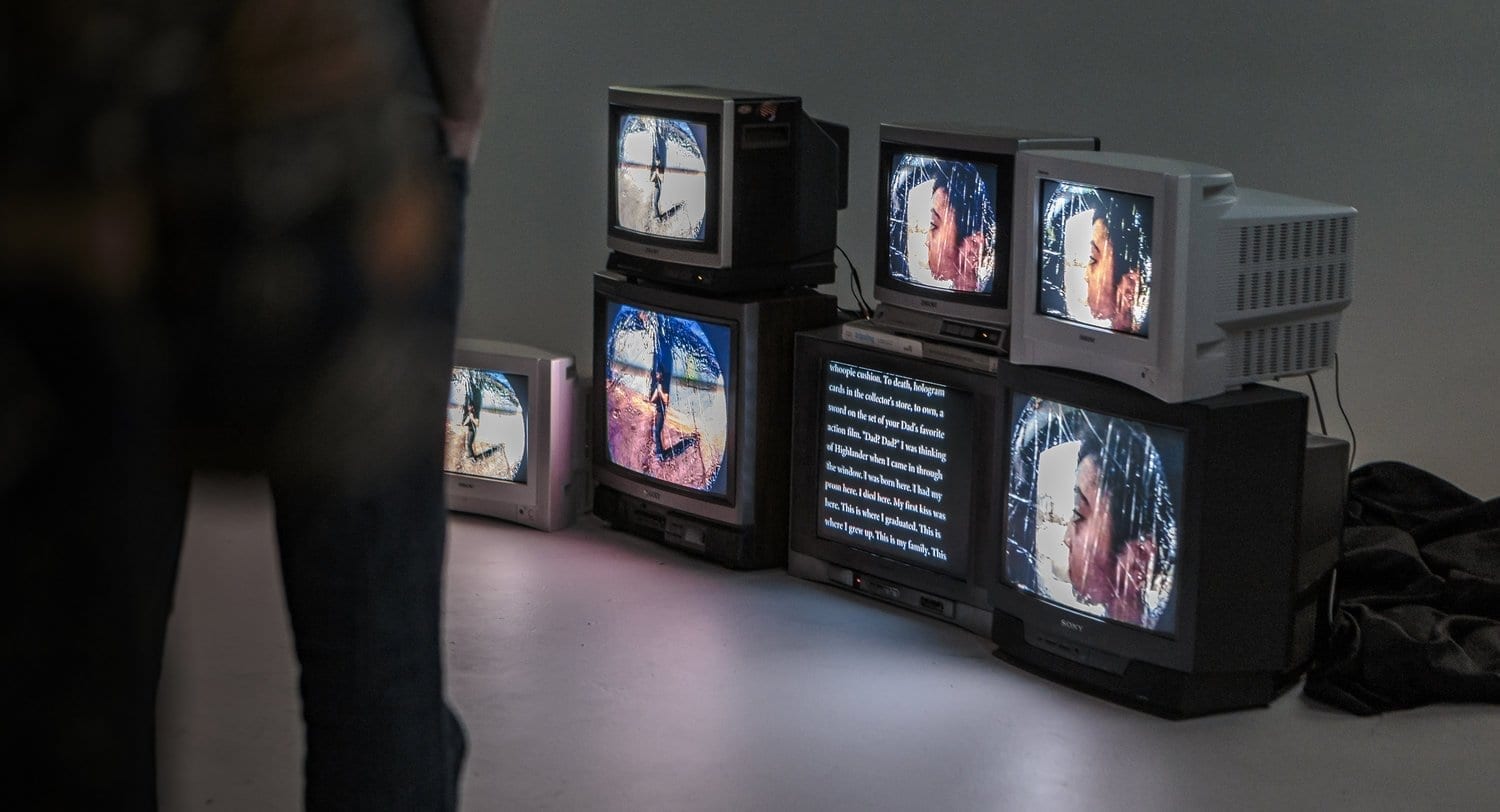 Lopez accomplished this through the idea of implanted memories. He recorded performers reading his poems set against various suburban backdrops. The audience could then move through the installation from screen to screen, memory to memory if you will. The effect is oddly stirring. The audience sees their own memories of suburbia reflected back at them. But how can so many people relate to Lopez’s own experiences? Simple: through the perpetuated idea of American suburban culture.

“It’s definitely a critique not just of the past, but of our perception of time in general, and how American mass culture fetishizes and socially produces nostalgia and convenient linear narratives,” Lopez says. “I enjoy ‘uncovering’ the rituals and artifacts we evoke memory retrieval through. There is a romanticization ascribed to referencing, historicizing and materializing our experiences and typically this comes by the way of reflecting on childhood.”

Lopez illustrates this by pointing out how many of our childhood memories prey on consumerism. We remember theme parks, TV shows, toys, and we continue to purchase products that remind us of those times. Companies using nostalgia to sink their teeth into your wallet is nothing new, but Lopez portrays this subtly, through the use of his Dante-esque neighborhood.

It’s been a year since the Icon Suburbia show, and Lopez has continued to evolve his art. He has moved away from the themes of suburbia and into more universal human experiences. He is experimenting with sculpture, 360 video, and augmented reality. His latest video project, done in collaboration with artist Aditi Ohri, is titled ‘Amor Fati (CH 777)’, and is about a late night TV personality who sells his soul. Lopez is changing as an artist, but Icon Suburbia still holds a special place in his heart.

“It was a tremendously rewarding, life-changing experience,” Lopez says. “There was a really receptive audience which led to great interactions and I believe it will affect my art process in the future. Being it was one of my first solo exhibitions, I was very nervous in the beginning, but it quickly turned into one of those moments where people, creativity, and space combine into a resonating positive feeling. I couldn’t be happier about how the product turned out.” 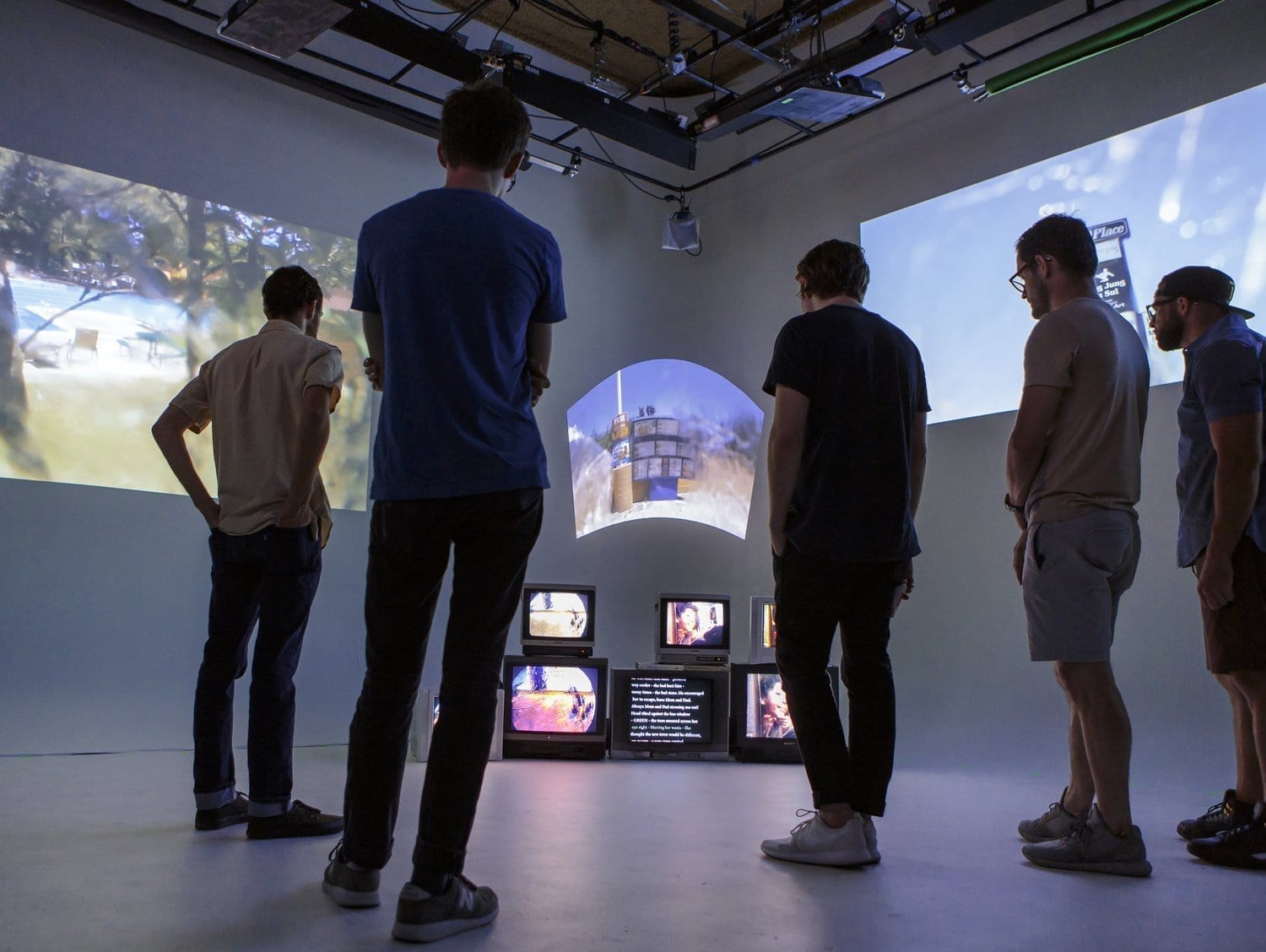